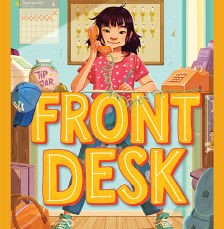 Contra Costa County Library is excited to launch the first Community Reads for Kids featuring Front Desk by Kelly Yang. Our community reading program strives to get everyone in the County to read and discuss the same book. The program includes a virtual book discussion and a live Zoom event with the author.

Front Desk is Kelly’s award-winning middle grade debut novel about a 10-year-old Chinese American immigrant girl who manages the front desk of a motel while her parents clean the rooms. Front Desk has received numerous awards including the Asian Pacific American Award for Literature and the Parents’ Choice Gold Medal. Front Desk was chosen a Best Book of the Year by multiple publications, including NPR, the Washington Post, and the New York Public Library. A sequel, Three Keys, is also available and the third book in the series, Room to Dream, will be released in September.

Kelly immigrated to America when she was 6 years old and grew up in Southern California, where she and her parents worked in three different motels. She eventually left the motels and went to college at the age of 13 and law school at the age of 17. She is a graduate of UC Berkeley, where she majored in Political Science, and Harvard Law School. After law school, she gave up law to pursue her passion of writing and teaching writing to children. She is the founder of The Kelly Yang Project (kellyyang.edu.hk), a leading writing and debating program for kids in Asia and the United States. She has three children and splits her time between Hong Kong and San Francisco, California.

Plenty of copies of the Front Desk series are available for check out. Use the catalog to reserve the books, eBooks, or audiobooks.