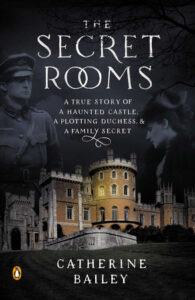 This month the Ygnacio Valley Library Book Club will be discussing The Secret Rooms by Catherine Bailey.

For fans of Downton Abbey, this New York Times bestseller is the enthralling true story of family secrets and aristocratic intrigue in the days before WWI

After the Ninth Duke of Rutland, one of the wealthiest men in Britain, died alone in a cramped room in the servants’ quarters of Belvoir Castle on April 21, 1940, his son and heir ordered the room, which contained the Rutland family archives, sealed. Sixty years later, Catherine Bailey became the first historian given access. What she discovered was a mystery: The Duke had painstakingly erased three periods of his life from all family records—but why? As Bailey uncovers the answers, she also provides an intimate portrait of the very top of British society in the turbulent days leading up to World War I.