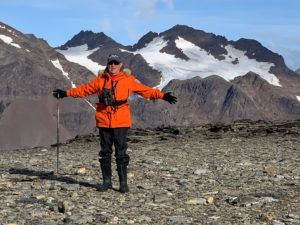 Ernest Shackleton set out with 27 men to cross the Antarctic Continent, but before landing, his ship was locked into the ice and eventually crushed.  The men were stranded on the Weddell Sea ice pack, and only barely managed to escape.  Landing on the extremely remote Elephant Island, Shackleton left 22 of the men to survive while he and five others made an incredible small boat journey.  Learn about one of the greatest rescue stories of all time, with original photographs and photographs from Mark Jordan’s recent trip to the area.

Mark Jordan is an intrepid adventurer and lecturer with an abiding interest in exploration, especially Polar exploration.  He recently adventured to Antarctica, South Georgia and the Falkland Islands, tracing much of the route taken by Sir Ernest Shackleton in his Endurance Expedition.  Mr. Jordan, a retired attorney, teaches and lectures on the Lewis and Clark Expedition and Shakespeare at various venues including the Walnut Creek Library, the Blackhawk Museum and Cal Sate University East Bay.